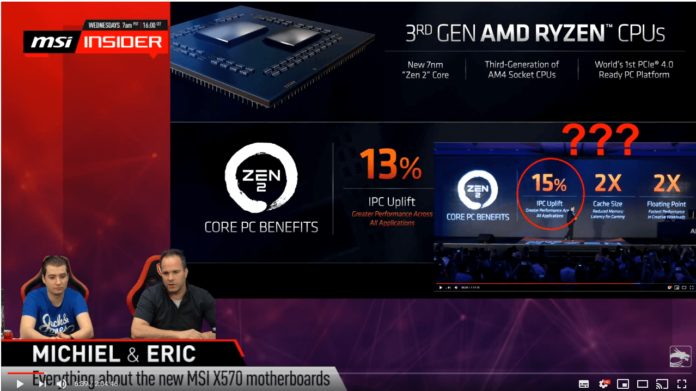 AMD announced the 7nm Ryzen 3000 CPUs on 27th May, claiming an IPC gain of 15% over the older Zen+ architecture at a lower TDP thanks to the efficient new process. However, today during MSI’s internal presentation, the slides claimed an IPC boost of 13%. So who is in the right? The likely case is that AMD has the correct figures, and MSI’s slides are either outdated or just the result of an error or miscommunication. Still, this is rather lousy for such a major announcement.

The MSI insider video detailing the company’s new X570 motherboard for the Ryzen 3000 lineup contained some slides pertaining to the new Zen 2 processors, and clearly mention the IPC uplift as 13% across all applications. However, if you look at footage from Dr. Lisa Su’s keynote, the same was 15%. You may think that I’m making a big issue out of this, but misleading marketing (if that’s the case) can lead to class-action lawsuits, something chip-makers are quite used to facing at this point.

We’ll have to wait for the third-party benchmarks to see whose info is correct, or if this is just the result of outdated slides or simply a typo.