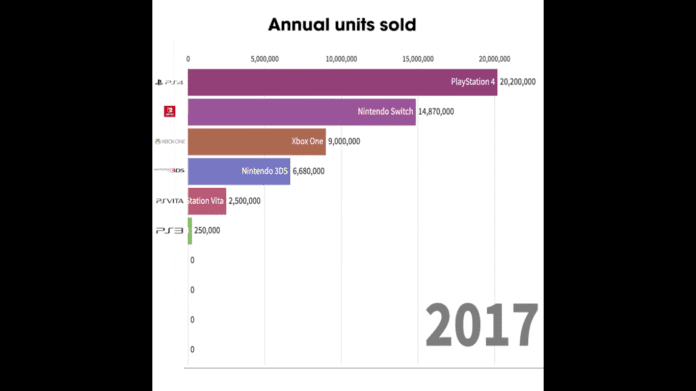 TNW has compiled an animated visualization that tracks the sales of various consoles over a span of 40 years. The site notes that this data is more of a “happy estimate” than an accurate representation.

The graph starts in 1977 with Atari pretty much being the entire market, though competitors come in the following years, Atari holds fast at the top until 1985 where Nintendo makes its debut with the NES and usurps the throne. At this time, the video game industry was experiencing a large-scale recession which started in 1983. However, as seen in the graph, thanks in a large part to the success of Nintendo’s NES system, the industry managed to bounced back.

Following its debut, Nintendo manages to hold the top spot in the console market, with the success of the NES, SNES and the Game Boy. Their position soon falls however with Sony’s debut of the PS1 in 1995 which soon goes on to eclipse Nintendo’s reign in the home console market in the following years. However, the Game Boy continues its rule in the handheld console market unchallenged, a reign that is easily carried and maintained by its succesors, the GBA, Nintendo DS and 3DS.

With the PS1 dominating its generation, Sony’s reign only continues with the launch of the PS2 in 2000, a system which has gone on to become the best selling video game console of all time. The sixth generation of video games is pretty much just the PS2, with its direct competitors, Microsoft’s newly debuted Xbox and Nintendo’s Gamecube far behind in the distance.

The seventh generation, however, trips up Sony’s continued success as the PS3 begins its life lagging behind Microsoft’s Xbox 360 and Nintendo’s Wii whose “casual” appeal gave it top billing in sales for the generation. Towards the end though, the PS3 managed to skate past its nearest rival and overall perform admirably in its run.

And finally, we enter the 8th and current generation where Sony has once again taken the lead with the massive success of the PS4 which has already outsold its predecessor. Nintendo’s follow up to the Wii, the Wii U, was to put it bluntly, a pretty big flop for the company, however, their latest system, the Nintendo Switch has been making waves in the market, outselling its predecessor within the year and quickly catching up to the Xbox One.

The Switch’s central conceit, being both a home and handheld console, pits it as a unique alternative to its rivals and it also carries the combined weight of both Nintendo’s home and handheld consoles’ legacy behind it. Sony continues its push towards big exclusive games and experiences to maintain their console’s position while Microsoft seems to be moving the Xbox One forward as a service especially with the recent implementation of the Xbox Game Pass.