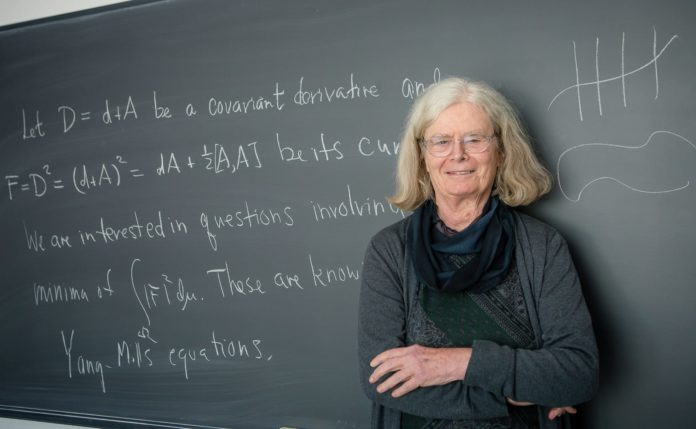 Dr. Karen Uhlenbeck, an emeritus professor at the University of Texas at Austin has become the first woman to be awarded one of the world’s most prestigious international mathematics awards, the Abel Prize. Dr. Uhlenbeck, 76, was presented with the award for her work on partial differential equations. The prize, which is named after the 19th-century Norwegian mathematician Niels Henrik Abel, comes with a cheque for $703,000. It is also described as the Nobel prize in the field of mathematics by many, even more so than the fields medal which Maryam Mirzakhani won in August 2014, and as such becoming the first, and the only woman till date to have that honor.

The jury said that Dr. Uhlenbeck received the Abel for her fundamental work in geometric analysis and gauge theory, which was followed up with a statement on how her work had dramatically changed the mathematical landscape. They also applauded her as “a strong advocate for gender equality in science and mathematics.”

“Her theories have revolutionized our understanding of minimal surfaces, such as those formed by soap bubbles, and more general minimization problems in higher dimensions”

The Cleveland native “developed tools and methods in global analysis, which are now in the toolbox of every geometer and analyst,” the Norwegian Academy of Science and Letters said in a statement. “She did things nobody thought about doing,” said Sun-Yung Alice Chang, a mathematician at Princeton University who served on the five-member prize committee, “and after she did, she laid the foundations of a new branch of mathematics.”

Norway’s King Harald V will present the prize at a ceremony in Oslo on May 21. Dr. Uhlenbeck, who is now a visiting associate at the Institute for Advanced Study in Princeton, remarked that she had not decided what to do with the $703,000 (six million Norwegian kroner) that accompanies the honor.