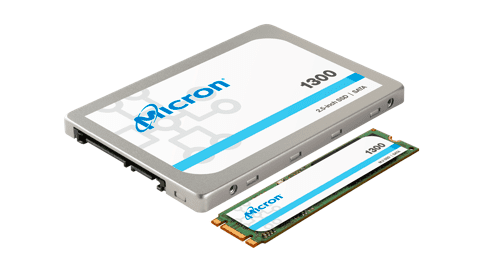 Micron has launched a new SATA based SSD called the Micron 1300. It succeeds the Micron 1100 series and packs 96-layer 3D TLC NAND chips. The drive also comes in an M.2 form factor other than the regular 2.5″ design. However, looking at the insides the drive is mostly unchanged compared to it’s older relatives.

The 256GB and 512GB models have endurance ratings of 180 and 300 TeraBytes Written (TBW), with the 1TB and 2TB drives taking it all the way up to 400. The Micron 1300 comes with support for device sleep low-power mode (DEVSLP), asynchronous power-loss protection, adaptive thermal monitoring, Garbage Collection, and S.M.A.R.T.

The low-power mode allows the Micron 1300 to cut down the drive’s draw to 5 milliwatts. As of now, there’s no word on the availability or pricing of the new SSD.