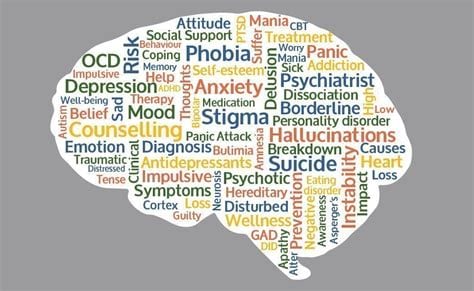 Fifty percent of mental illness begins by the age of 14. According to the WHO, mental disorders affect one in four people in their lifetime. That is to say, nearly 450 million people currently suffer from such conditions. There are different types of mental disorders. These include Anxiety, Bipolar Disorder, Depression, Eating Disorders, OCD, Personality Disorders, PTSD, Psychosis, Schizophrenia and the list goes on. We’ll be focusing on the more common types in this article. You might be questioning if you are a victim of a mental disorder yourself. So let’s begin with the question you’re probably asking yourself right now.

HOW DO I KNOW IF I’M SUFFERING FROM A MENTAL ILLNESS?

There are a lot of factors that need to be considered. Simply feeling “sad” or “low” might not exactly equate to depression. However, in some cases, that’s exactly what they’d mean. Some generic symptoms are excessive fears, sleep, appetite changes, social withdrawal, suicidal thoughts, persistent nightmares, delusions and hallucinations. If you think you’re experiencing these symptoms, you might want to pay your psychiatrist a visit. There are some ways to check for the presence of mental illnesses online but we can’t vouch for their accuracy. Self-diagnosis or diagnosis from an individual with no credentials is not to be encouraged as it may lead to misinterpreting the real condition or believing in something that you might not have. Approaching a licensed practitioner is strongly advised.

Mood disorders refer to a group of conditions where a disturbance in the person’s mood is the underlying feature. Examples of mood disorders are MDD (Major Depressive Disorder), Bipolar Disorder, Dysthymia, Cyclothymia, and Seasonal Affective Disorder (SAD). People suffering from Mood Disorders have described how they feel as “a constant question mark” and “an emotional roller coaster”. What causes such feelings? Irregularities in noradrenaline and serotonin. What’s the cure? In most cases, therapy along with some drugs helps. Cognitive Behavioral Therapy (CBT) helps establish one method that focuses on your actions and behaviours. Mood stabilizers like Carbamazepine and Lamotrigine are often prescribed.

This group of disorders and the subsequent distress they cause can keep you from carrying on with your daily life. For instance, some types of anxiety disorders include Panic Disorder, Generalized Anxiety Disorders, Specific Phobias, and Social Phobia. The cause of anxiety disorders can vary from person to person. In some cases, an underlying medical condition might be the fault. In others, it might be a side effect of a drug. In many cases, personal experiences can attribute to the onset of this condition. How can we cure anxiety disorders? There is no cure as such. However, antidepressants, anticonvulsants, antianxiety agents and benzodiazepines can help reduce the symptoms.

Severe mental disorders that cause abnormal thinking and perceptions. Delusions and hallucinations lead to people losing touch with reality. Schizophrenia, Delusional Disorder and Schizoaffective Disorder are examples of psychoses. One per cent of the population suffers from such disorders. Hyperactivity of chemicals in the brain is the underlying cause of these abnormalities. Treatments include psychotherapy and medication. Antipsychotics like chlorpromazine (CPZ), and haloperidol are helpful.

These conditions are one of the most neglected types of disorders. Eating disorders are not a lifestyle choice. Anorexia nervosa, Bulimia nervosa and Binge-Eating Disorder are some instances of an eating disorder. Causes are mainly related to family history. People with eating disorders often develop mental disorders or vice versa. Cognitive-Behavioural Therapy and Family-Based Therapy are the most common treatment methods. Early diagnoses of these conditions are essential; otherwise, hospitalisation is required.

These conditions are classified as Cluster A, B and C personality disorders. People tend to have a rigid and unhealthy pattern of thinking. Examples include Paranoid Personality Disorder, Schizoid PD, and Borderline PD. Genetic factors are to blame for such disorders. Prozac, Zoloft, and Lithium supplements help stabilize the mood but require a prescription. Substance abuse and addiction coexist with personality disorders in nearly 46% of the cases.

Note: These drugs can only be consumed when prescribed by a practitioner.