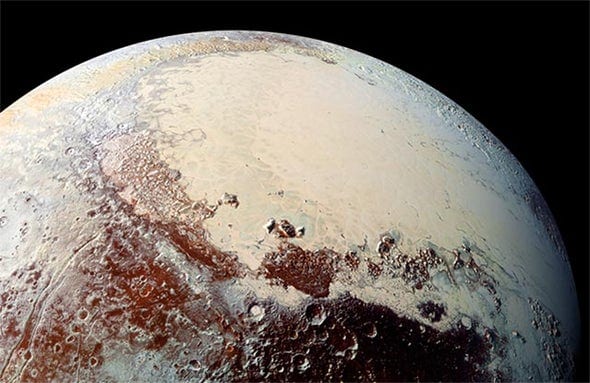 Pluto is probably the most distant relative of Earth in the Solar System, distance-wise. Located at the outer edges of the solar system, Pluto is cold, dark, and most probably lifeless. It has only one moon which is almost as big as the planet itself. Pluto is so small that the planet-moon duo spins around a collective axis that lies somewhere in between both the heavenly bodies.

Pluto has been the point of interest for astronomers, physicists, and geologists alike for some time now. The nature of this mysterious member of the solar system is a mystery waiting to be unravelled. Pluto is covered in ice. This has been known for a long time now. For a dwarf planet that is forty times farther than the Earth, the only form of water you would expect to find there would be in the form of ice.

Recently, scientists have been collecting more and more evidence that suggests the presence of a liquid ocean made up of water. It might exist under the unforgivingly cold surface of the dwarf planet. The idea seems puzzling at first glance. How could a liquid ocean exist in a place in our solar system where the average temperature is -229.8 degrees Celsius? Well, the answer is complicated.

The first factor that helps the dwarf planet retain its ocean in the liquid form is probably insulation. If a layer of insulation were to exist, it could help trap the heat that is generated and keep the ocean warm. Recently published studies suggest that there could be a layer of gas just beneath the icy shell of Pluto, which could be acting as an insulating layer for the ocean. This is now considered the best explanation for what is happening beneath the surface.

The direct evidence for the existence of a sub-surface ocean is scarce. Our main sources of confidence in this theory come from the mathematical viability of the idea that nuclear decay happening in the rocks of Pluto could sustain a liquid ocean beneath the surface. The second such evidence comes in the form of geological features that are found only with sub-surface bodies of water, such as fractures created from ocean refreezes.

The best shot for looking for water on Pluto would be Sputnik Planitia. It is a big basin near the equator. Scientists have a very good reason to think that there might be a deep pool of water under a thin sheet of ice. This makes it the best location to look for water.

There are some problems with these theories as well. The biggest problem in the way is the fact that if the interior of Pluto is warm, the outer ice shell should be soft. Soft enough to become a globular structure. Direct observation of Pluto tells us that it is not globular. This contradiction could be a major hurdle. All these models are a way to rationalize what we may think might be true. There is no certain proof for the existence of a subsurface ocean on Pluto, yet. However, it would be interesting to watch this space as we try to find ways to either confirm or discredit our theories.