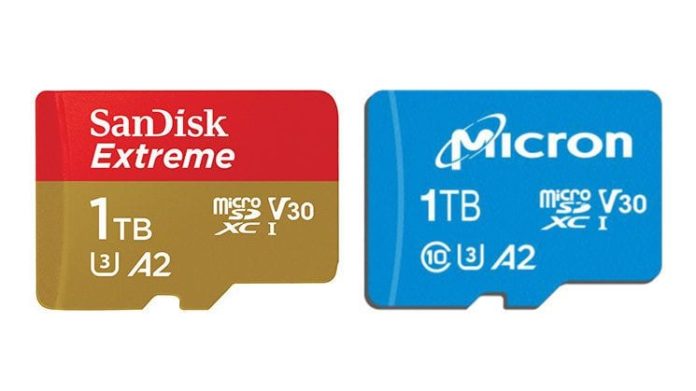 With 2019 smartphones supporting as much as 512GB of expandable memory via MicroSD cards, it’s pretty safe to say that one can never really have too much of storage. That’s why SanDisk and Micron went a step further and announced the world’s first 1TB microSD cards at MWC (Mobile World Congress) 2019.

Both the chips represent the pinnacle of technology in the world of expandable storage. The previous highest capacity of a microSD was seen last year when UK-based company, Integral Memory came out with a 512 GB SD card. SanDisk announced a 512GB SD card too, along with the 1TB one.

Intel 6th Gen Skylake Processors to be Discontinued after 4 Years

Both the cards support the A2 app performance class specification. This means they are suitable for running Android applications directly from the card.

Both SanDisk and Micron 1TB SD cards won’t be on sale until the second quarter of 2019. SanDisk revealed the pricing for both the 1TB and 512GB cards, the SanDisk Extreme 1 TB microSDXC will cost you $450 while the 512GB card will set you back by $200. Micron hasn’t announced the pricing of its microSD card yet but it’s expected to be a bit cheaper than SanDisk’s offering as the company indicated the pricing “will be competitive for the target audience”.

AMD’s Radeon VII GPUs Selling For $850 on Amazon; Out of Stock Everywhere Else

OnePlus 7 CAD Renders Leaked : This is how the OnePlus 7 Looks