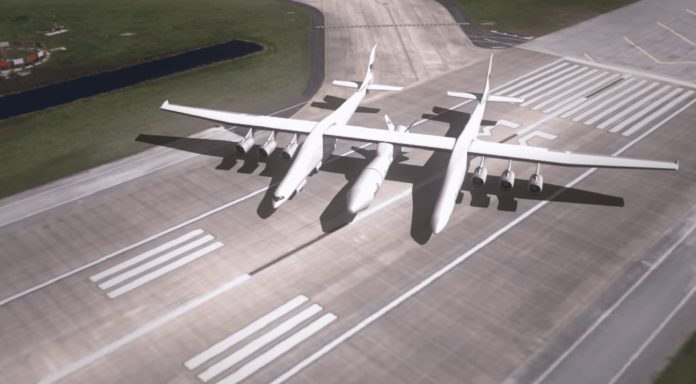 Air and space enthusiasts gear up! The world’s largest plane is scheduled for it’s debut flight in 2019. The Stratolaunch is all set to break the records with its 385-foot wings, stretching longer than a football field. The airplane is primarily designed to launch rockets into space (known as low-Earth orbit). This means the aircraft is expected to fly between 99 and 1,200 miles above the Earth’s surface, where most satellites and space stations are.

The spacecraft was first unveiled in 2017. Since then it has undergone various tests. The most recently performed test was a runway test where the aircraft reached a maximum speed of 46 mph. Many more tests are scheduled however, before the flight next year.

The plane consists of two fuselages and two separate cockpits. The aircraft is 238 feet long, 50 feet tall, and has six high-bypass-ratio turbofan engines. It weighs 500,000 pounds and needs 28 wheels between its two fuselages. The rockets to be launched using the plane will be tethered to its belly and “air launched” into space at the correct height. The plane has reportedly been nicknamed “the Roc”, after a mythical Middle Eastern bird which was so big it could carry an elephant in its claws.

The colossal aircraft is backed by Microsoft co-founder Paul Allen. Allen’s visionary plan for the company and its aircraft is to “provide convenient, reliable, and routine access to low-Earth orbit.” Hence the idea of launching rockets directly in mid-air has evolved, which is expected to be less expensive than the current space launch options.

The twins are currently in the testing/constructing phase at the Mojave Air and Space Port in the Mojave Desert, California. This plane, designed to carry as many as three rockets, could ideally be launched from anywhere in the world, as long as the runway can accommodate it’s size. Being able to get this beast into the air would be a huge feat in the field of science and aeronautics. And soon it will be capable of flying space stations, taking satellites to orbit, and maybe one day, even people.