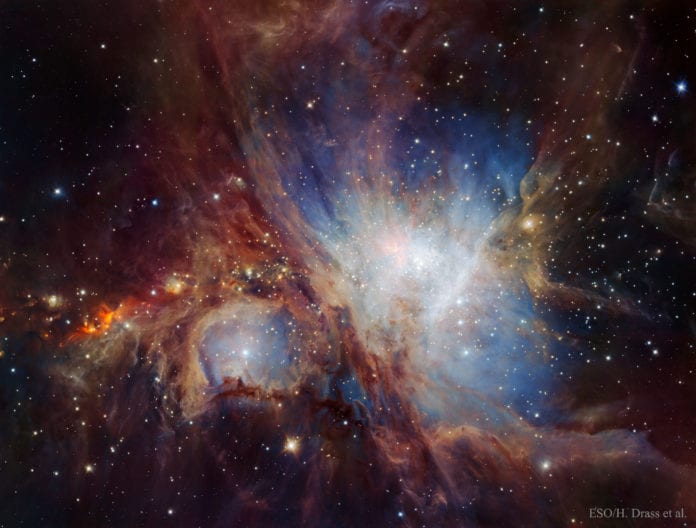 The magnitude of The Big Bang was unfathomable, and we might never actually be able to gauge the extent of the effect it has had on our reality. Nevertheless, explosions are not that uncommon in our universe. An almost infinite number of explosions take place every day, and most of them go unnoticed owing to the scale of this gigantic Universe. Recently, astronomers detected the biggest explosion since The Big Bang.

The great explosion took place in the Ophiuchus cluster, 390 Million light-years away from Earth. Using four telescopes, a team of researchers detected a huge hole that the blast punched in the plasma that envelopes the Galaxy cluster.

The researchers have hypothesized that the hole was made by a humongous burst of energy from a supermassive Black hole at the centre of one of the Galaxies in the cluster. Physicists estimate that the blast would’ve released energy equal to the annual output of 1020 suns. This is about five-fold the energy of the previous record holder of the title of the biggest explosion since The Big Bang.

The confirmation of the said observation was extracted from several observatories across the globe, including NASA’s Chandra X-ray Observatory, ESA’s XMM-Newton X-ray Telescope and the Giant Metrewave Radio Telescope here in India. The multiple sources of information confirmed the previous X-ray studies which pointed towards the existence of a huge rift in the cluster plasma.

The hole was so big that 15 Milky way galaxies could be fit in a row into the crater that the explosion had punched into the Plasma. The cause of the extraordinary size of the explosion is still unknown. The sheer scale of the explosion serves as a humble reminder of our insignificance in this vast universe and the fact that we have yet to uncover vast secrets of this universe.